Emperor's DNA: The Custodes use a lengthy and complicated process to genetically augment humans. The Custodes of the Heresy were once human, but were selected by the Emperor and modified such that they could become his bodyguard. They do not use any kind of Geneseed nor do they use the Emperor's DNA, but they take the potential present in natural human DNA and stretch it to the highest points imaginable.

This, however, does not automatically render them immune to aging. Because they are *human* and not the Emperor himself, they are going to grow old and very slowly lose combat aptitude. If you expect Valdor to be as fit as someone in his prime, yet be 10,000 years old, you ask too much. Plus, the Horus Heresy hasn't ended yet; Valdor may yet find his end. And if Valdor was still alive during the Age of Apostasy, would it not be him who enlightened Alicia Dominica?

Will is terribly vague and bent, though. Theoretically, the Dragon could overload a mind with information and drive someone to insanity or even complete shutdown of bodily systems.

Children have yet to be balanced, and I don't exactly see how giving mana to the dragon and taking a portion of his damage correlates to seeing visions and being able to repair technology.

And Necrodermis is whatever you really want it to be. Technically, it's living metal, which can regenerate and prevent things for rolling for more armor penetration = damage reduction. I don't really have any problem with its interpretation.

Not to mention there's NOTHING about technology in his skills at all. Shame on you, Deus.

Void Dragon feeds off the bioelectricity, biomechanical energy, or whatever you want to call it produced by the cybernetic / mechanical implants / prosthetics of the Mechanicum (the C'tan found easier, more enjoyable, meals in mortals - Nightbringer feeds off their fear, Outsider insanity, Deceiver ... I don't know ... he's just power hungry). The fact that they're called the Children ... I don't know, just sounds cool. >_> Doesn't have to be related to the actual Children sent by the Emperor.

What else is there to do with tech that Big Mek doesn't do? Big Mek covers all the "augments", attack speed, armor, et cetera. Ooooh, he could take control of Killa Kans / Dreadnoughts ... <_< ... fail.

And I read something somewhere about if a Necrodermis is punctured, the C'tan's essence flooding out of it would cause an explosion. That's fluff verified.

I read somewhere, it might've been fan fluff and not official, I need to found the source again, that Valdor was created during the Unification Wars. If that's true, that would make him 2-3,000 years old during the Heresy? M28, Heresy was in M31. Anyway, I'll need to find that again.

But that still doesn't address the issue of, if they are not immortal, then how are they still around? They were hand chosen and hand crafted by the Emperor. As you said, no gene-seed, so the High Lords can't just slap them together on an assembly line like they can Space Marines. And I'm pretty sure the "Cursed Founding" demonstrates how horrible the High Lords are at doing any kind of genetic modification themselves.
_________________
“The Machine is strong. We must purge the weak, hated flesh and replace it with the blessed purity of metal. Only through permanence can we truly triumph, only through the Machine can we find victory. Punish the flesh. Iron in mind and body. Hail the Machine!”

The mana transfer makes sense, but not the damage reduction, because that would require a two way circuit of damage transference, which isn't evident.

Imagine Void Dragon as the anti-thesis of what a Big Mek does.

As for Custodes, it's probably an in-house technique. Only the Custodes know the processes of genetic modification to make other Custodes, and it is not their responsibility to share that knowledge. Though the Emperor may have lost his mortal form, the Custodes aren't stupid. It's likely the Captain-General judges new recruits and tests them.

Key word there: Probably. There's no fluff deciding either way (unless I can find that source for Valdor being engineered during the Unification Wars).

Anyway ... Void Dragon is a lot like the Big Mek (except his machines actually work all of the time). He influenced the creation of the Mechanicum. He has to power to build or to destroy, empower or drain ... if you can turn that into some kind of in-game effect, go for it. Maybe similar effects as Big Mek's current ult, only in reverse, instead of dmg removing them, healing % of max HP does, or something. Idk.
_________________
“The Machine is strong. We must purge the weak, hated flesh and replace it with the blessed purity of metal. Only through permanence can we truly triumph, only through the Machine can we find victory. Punish the flesh. Iron in mind and body. Hail the Machine!”

Well, regardless, until you find something tangible proving Custodes can live 10,000 years, I'll stick to my positions.

Uhm after that epic posting spree you guys had, you might want to put some thought into reading the first post again. >_>
_________________
The warrior who acts out of honour cannot fail. His duty is honour itself. Even his death - if it is honourable - is a reward and can be no failure, for it has come through duty. Seek honour as you act, therefore, and you will know no fear.

Step one: Well done, indeed. The story is fine. C

Step two: Make your character's skills Custodes-exclusive, or at least make it so that another terminator wouldn't be able to duplicate his skills.

I know the fluff for Custodes is pitifully thin, but surely you can take a few of the main Custodes qualities and make his skills more personalized.

What do you mean by 'Main Custodes Qualities' surely you dont want a Terminator to become an assassin of sorts? O.o Or having to sit down and bore the enemy to death with politics... >_>

Hmm, possibly his ult can be similar to one of those huge cannons I saw one of the Termi-trio wielding... It was a long cannon with a stylised golden dragon head on the end. But sure, their epic and tank. What would you suggest?
_________________
The warrior who acts out of honour cannot fail. His duty is honour itself. Even his death - if it is honourable - is a reward and can be no failure, for it has come through duty. Seek honour as you act, therefore, and you will know no fear.

"These men are my bodyguards, their lives forfeit to the guarantee of my physical safety. Of their loyalty to me there shall be no question nor doubt. I, and I alone, shall have the authority to stand in judgment over them. No other commander shall they have in battle nor in service. None shall bar them from me and none shall hamper or stall their mission. So it is decreed!" -The Emperor

The Legio Custodes was the Emperor's personal bodyguard. They first appeared at his side during the Age of Strife, and since then have maintained a constant vigil over his person. In battle, a double strength company always fights alongside him, and a detachment of the Guard even accompanies the Emperor when he retires to his private chambers within the Imperial Palace.

Each custodian is an awesome warrior, stronger and more resilient than a normal human, or even a Space Marine. They are without peer in battle and have unshakable devotion and loyalty to the person of the Emperor. Although they do not appear to have any psychic powers of their own, their willpower is such that they can resist assaults from the most powerful of psykers, save perhaps the Emperor himself.

There are reckoned to be only a thousand of these elite warriors in total, although this is highly speculative. Only the Emperor and his inner circle know their exact number. Certainly no more than a thousand have been seen at any time, and then only once at the famous Battle of Gyros-Thravian, fought during the Great Crusade against the ork warlord, Gharkhul Blackfang and his vast greenskin horde.

The Primarches Horus, Rogal Dorn, and Mortarion and their legions were vastly outnumbered and close to defeat when the Emperor led an assault from his golden battle barge, the Bucephalus. At the head of a thousand Custodians, the Emperor struck at the very heart of the ork horde, confronting Gharkhul aop a towering Gargant. As the Emperor decapitated the giant, black-skinned ork, the Custodians laid waste to the warlord's prime warriors. It is said that within moments over a hundred thousand greenskins died and the Waaagh! was broken. Legend has it that only three Custodians fell at the battle, their names enshrined forever, engraved on the Emperor's armor.

The origins of the custodian guard are shrouded in myth and legend...

Some say that the Custodian Guard are to the Emperor what the Space
Marines are to the Primarchs; that the Emperor's own genetic matrix was
used in their creation and through this their loyalty to him is assured. Others
argue that the Custodians are not like the Emperor in the way that a
Space Marine is like his Primarch, and that some other source was used as a
template for their physical and psychological form; a source that was lost during the anarchy of the age of strife. The truth will likely never be known.

The cannon is a flamer, by the way. You know Custodes are well versed in protection and are devastating in melee range. They have a higher than average resistance to psykers, and are extremely hard to kill. Be imaginative. By the way, how is he a tank? All he gets is extra health. No other source of damage reduction or armor.

Also, look at this badassness; 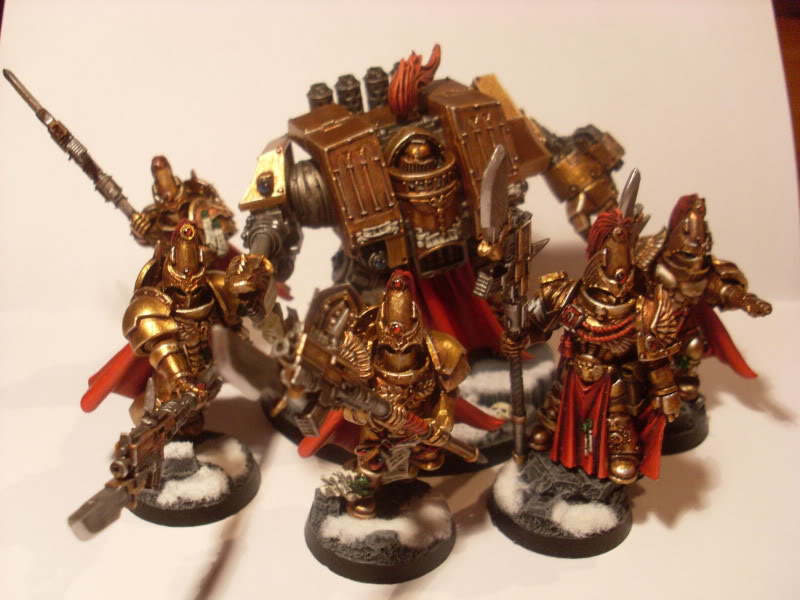 _________________
“The Machine is strong. We must purge the weak, hated flesh and replace it with the blessed purity of metal. Only through permanence can we truly triumph, only through the Machine can we find victory. Punish the flesh. Iron in mind and body. Hail the Machine!”

Oh yeah. I was reading a portion about the Custodes. A mere 30 custodes destroyed a Thousand Sons force consisting of 10 terminators, 3 sorcerors, and 140 regular Space marines and 7 Custodes survived at the end. That's just absurd. You can't put that kind of ridiculousness in the map.

One Custodes Terminator could likely kill 200 orks without breaking a sweat, making them engines of destruction. Even Kharn would have a hard time fighting a normal Custodes, which is saying something.

*hint: save this for Primarch mode*

Was that Valdor and his squad during the destruction of Prospero?
_________________
“The Machine is strong. We must purge the weak, hated flesh and replace it with the blessed purity of metal. Only through permanence can we truly triumph, only through the Machine can we find victory. Punish the flesh. Iron in mind and body. Hail the Machine!”