Spoiler:
"Your presence does not surprise me, Assassin. I have known of you ever since your craft entered the Eastern Fringes. Why did I not have you killed? Because your mission and the act you are about to commit proves the truth of all I have ever said or done. I merely punished those who had wronged, just as your false Emperor now seeks to punish me. Death is nothing compared to vindication."
- Last recorded words of Konrad Curze

"After being torn from Terra by the powers of Chaos, Konrad Curze was deposited on the planet of Nostromo- a planet where the few wealthy lorded over the starving, poverty-stricken masses. Konrad would soon become the vigilante known as the 'Night Haunter', hunting and mercilessly slaughtering those he marked for death in Nostramo Quintus. He left his targets to be found in the streets every morning, disembowled, dismembered, or beaten beyond recognition. A gruesome and unquestionable message to all- rich or poor, corruption was death."

"Hail the Lord of the Night!, the rallying cry the Night Lords. The dark and bloody reputation of Konrad Curze would scare entire systems into surrendering during the Great Crusade, and leave his war-hardened opponents and former brothers cowering in fear during the Horus Heresy. The mention of the 'Night Haunter' could reduce men to boys."

"Since birth the Primarch of the Night Lords has been plagued with visions of a dark and terrible future. These visions of dread have largely shaped the character of Konrad Curze, setting him on a merciless, and largely misunderstood, mission to save the galaxy from the visions that haunt him. Upon the Emperor's arrival at Nostromo, Konrad was overtaken by a vision so terrible he nearly clawed out his own eyes. Stopped by the Emperor, "Konrad Curze, be at peace, for I have arrived and intend to take you home." Curze responded, "That is not my name, Father. I am Night Haunter, and I know full well what you intend for me.""

"When Horus began the Heresy, Konrad, following his visions, sided with the Traitor Legions. The Night Lords began a campaign of terror across the galaxy, leaving entire worlds devestated in their wake. To prove to the entire galaxy that evil could not go unpunished, could not be free to do as it wished, Konrad sacraficed himself and his men, leading them into the taint of Chaos and certain doom."

Ha, this dude is obviously dead right? Depends on what part of the Imperium hes from, could you maybe clarify on that before we develope this hero?
_________________
The warrior who acts out of honour cannot fail. His duty is honour itself. Even his death - if it is honourable - is a reward and can be no failure, for it has come through duty. Seek honour as you act, therefore, and you will know no fear.

Konrad Curze aka Night Haunter was the Primarch of Legio VIII, the Night Lords..

I think for the innate should be some sort of orb, eg: Once a unit killed is under this effect, all nearby enemy units become fearfull, losing ias, ms, and damage, and even more if Curze is present. Also give passive damage to Konrad?

Maybe skill one should be like the innate, major debuff and maybe a silence in a cone effect?

Skill two: #/#/#/# + bonuses when Curze gets within striking distance of an enemy hero?(maybe each attack?)

Skill three: (a bit touchy) Konrad leaps to the target point raving about vindication, careless for his own life. Once he hits the target point he 'spins' (much like axe in dota) crippling, and rushing to the weakest enemy hero with a major gain in movespeed.?

Ult: Maybe something like a windwalk, rush to select point, knockback stun etc, or a active spell immunity?

Just btw you dont have to consider these, if you already have a skillset planned

_________________
The warrior who acts out of honour cannot fail. His duty is honour itself. Even his death - if it is honourable - is a reward and can be no failure, for it has come through duty. Seek honour as you act, therefore, and you will know no fear.

Thanks for the suggestions. I've added effects for his skills (except his Ultimate). They'll need some tweeking, just layed out the general idea.

i liike it XD
the spoiler tags make it slightly difficult to follow... but from what i pieced together from a brief skim... its good

LoL.. Changed it to "Quote" instead of "Spoiler"

hmm, i still still like him XD finish up the ult, im moving this to developement
_________________
warning! very-stubborn, sarcastic, self-important, argumentative developer detected!

I personally think visions of terror's knockback needs to be nerfed, say 125/150/175/200. The current knockback is godly, so maybe his ult can be a sort of slow, or a much needed spell immune avatar; each 'fear token' gives X seconds of spell immunity, to make his 'disabling damage dealer' role more effective, thats the impression i get. His first four skills would make him a great killer early, farming is no problem.

His ultimate better not be too good, you have invested ALOT of effects in your first four skills, but that can be tweaked and fluffed out once you have completed him.
Good work btw ^^
_________________
The warrior who acts out of honour cannot fail. His duty is honour itself. Even his death - if it is honourable - is a reward and can be no failure, for it has come through duty. Seek honour as you act, therefore, and you will know no fear.

oh,a nd WHY does he stun himself for 3 seconds in his snd skill XD
_________________
warning! very-stubborn, sarcastic, self-important, argumentative developer detected! 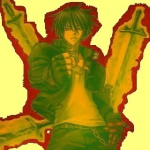 i r teh suxxorz at da math. Do you not know this yet?

and, find an ult for this guy!

But seriously, don't put him in the normal version of the game. xD I'd be happy to use the other notable Night Lords Character.

if we have c'tan and greater daemons in the normal version, we can have primarchs

something gly said in passing that might fit for his ult, i dunno.

makes konrad and allies invisible
could be passive or active or toggle (prolly not passive >.>)
and possibly have some sort of effect for breaking inivs
_________________
warning! very-stubborn, sarcastic, self-important, argumentative developer detected!

No. Conrad Kurze is not going in this. xD

The same skillset can be given to a Night Lords individual, but to put a primarch in will earn us so much mind-boggling spew from people that it's not worth it.

Maybe we could enter other primarches... C'mon we already have Phoenix Lords, just tone them down to suit. (Probably once we have ran out of hero ideas)
_________________
The warrior who acts out of honour cannot fail. His duty is honour itself. Even his death - if it is honourable - is a reward and can be no failure, for it has come through duty. Seek honour as you act, therefore, and you will know no fear.

so, your saying we can enter the skillset, but we cant call him konrad curz?

Because Grass, it's either we put all the Primarchs in who are still alive (And Cruze isn't, even!), all the Primarchs who ever existed, or none of them at all. You cannot nerf the skills down to that of a normal individual, because the people who play the map will pick up on that. Yes, we did it for the C'tan, but that's because:

1. There are times when their power can wane and there are only 4 of them.
2. People haven't really picked up on the absurdity of using a C'tan, which is supposed to be on par (power-level wise) with things that simply aren't mortal.
3. People don't really care as much about the Necrons because they haven't received all this attention. If we put one Primarch in, who's dead no less, we will get a ridiculous outcry saying where's my Fulgrim, or my Vulkan, or my Leman Russ (The list can go on).
4. I recall we did have a debate about primarchs a while back, and the conclusion reached is that they should belong in a mode separate from the normal hero classes. Right now, he's the only Primarch made and there are no plans for anyone to make a Primarch within the next 3-4 versions, yet. The skills will fit a special Night Lord Hero, with proper adjustment, but in no way, shape, or form should we put a hero named Conrad Kurze in the game unless we're prepared and actively working on a primarch mode.

A name is but a name, Grass. It's the skills which make the hero, and the skills are just as malleable as the name. It may be a black rose, but under any other name, people can still smell its quality, while not knowing what it truly is.

you look at the primarchs and see "this godlike human" that can destroy everything. the C'tan are the same and they are going in the map

theres *nothing* preventing us from putting primarchs in other than an irrational fear that either 'they have to be too powerful' or 'people will complain' that X primarch isnt in.

its entirely possible to tone down a 'super' hero to fit the WC3 (we did it with the C'tan already), and if people complain... well... people always complain. if they dont complain about primarchs, they'll complain about something else

the bottom line: primarchs *are* valid candidates for the map, dispite your disagreeal.


however: if you can rename this hero, go for it, im ok with that... just get past the block that primarchs cant go in

he's still a hero in the map