I was tinkering with the new beta recently. After testing out the badassery of the newly tweeked Ork Warboss (awesome job on that guy, btw), I decided to test out some other characters. One in particular bothered me a bit in terms of play style, the Imperial Commiasar.

For the most part, he was ok when it came down to overall effectivness, but I constantly found myself running out of mana in the middle of pitched combat. I could hardly use any of my abilities, so I was forced to stand by an outpost and wait until I could spawn more guardsmen. The other two abilities, Hold The Line and Summary Execution, simply weren't worth my precious mana. Don't get me wrong, they're good ideas in theory, (a possibility of increasing an entire army's attack/movement speed by 50% at the cost of one creep, and by 100% for killing a hero whose likely to already die sounds pretty good when you look at it on screen) but when it comes right down to it, I could only imagine them having a signifigant use later in the game if you're winning, in those rare moments when your creeps somehow get their act together and form a mob.

I understand he's just a support hero, but I'm not entirely sure he's going to be a popular guy once this game takes off and people start developing uber tactics, and only end up choosing the game-breaking heroes. So in light of this, here's some suggestions on how to imporve the hero.

- Make his primary attribute intelligence. This is for obvious reasons; it seems to me that as a ranged support hero, he was never meant to be on the front lines taking hits for everyone else. And come on, anyone who's read an Imperial Guard novel or played DoW knows these bastards don't fight the battles for themselves

. This way, he'll have plenty of mana for his abilties, and his role will be much better accomplished.

- Boost the effects of Hold the Line. As it is, the ability just isn't a worthwile way to spend your mana on as opposed to summoning Imperial Guards or using your ultimate. Only a slight increase is needed, though, imo.

- Change his ultimate into summoning a Baneblade tank. Because, come on, how fucking cool would that be?

Thanks in advance for reading this. Any suggestions/constructive critcism is welcome. 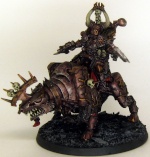 Fairemont wrote:Baneblade makes no sense... He's a commissar, not a Lord General or some such... >.>

That was more or less a joke. I had an idea for another ultimate when was writing the post, but after thinking about it, it wasn't very practical, so I just said that instead. My point still stands about the other two suggestions.

isnt hold the line like +7 armor and +9 regen or some such value? that is insanely powerful, not to mention the +25? damage to creeps if they stay in the same spot.

but i might be able to tweek manacosts.
and guardsmen are getting nerfed in this version

(unless you alrady have the version in which he was already nerfed >.>)
_________________
warning! very-stubborn, sarcastic, self-important, argumentative developer detected!

<.< Oh, Faire, Commisar Yarrick used a baneblade on a failed attempt to wipe out orcs after the Second Armageddon War.

cellrawr wrote:<.< Oh, Faire, Commisar Yarrick used a baneblade on a failed attempt to wipe out orcs after the Second Armageddon War.

As for hold the line, I suppose so, but I just didn't find it very useful for some reason when I was testing it out.

So, would you be willling to agree with lower mana costs and making him an intelligence hero?

not so much on the intelligence part

Grass Hopper wrote:not so much on the intelligence part

it doesnt feel right to me, but perhaps

He's a ranged, mana-centric hero who's sole purpose is to buff creeps. He doesn't even need strength.

He's only named yarrick in spirit, he in reality is a basic commisar type, thus needs a name change :p

ZebioLizard wrote:He's only named yarrick in spirit, he in reality is a basic commisar type, thus needs a name change :p

Perhaps letting him summon a Baneblade would make his name more appropriate?

and unless you feel like giving a generic commissar name?

he also has the possibility of being called gaunt >.> (i think that guy was a commissar... )
_________________
warning! very-stubborn, sarcastic, self-important, argumentative developer detected!

The player's advisor and second-in-command in the turn-based strategy computer game Final Liberation: Warhammer Epic 40,000. The only Commissar to be portrayed in live-action Full Motion Video by Larry Rew.