[For Fun] Emperor of Mankind

[For Fun] Emperor of Mankind 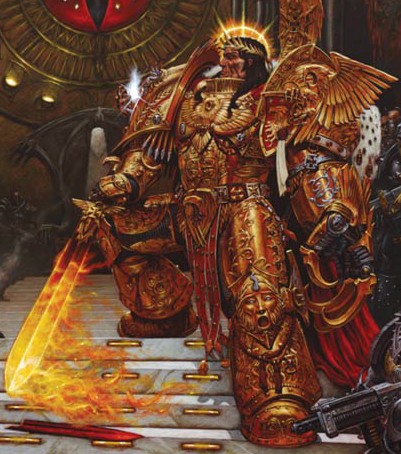 "Beware the perils of the Old Gods, that carry so many names. Steel your hearts and minds against their temptations, destroy their servants where ever you may find them. Hold the Imperial Truth closer than you would anything else. Know me and take heed, for I am the Emperor of Mankind, the destroyer of Kaos and the beacon to which humanity, far and wide, must rally to in this galaxy in turmoil."

Forged by the Emperor of Mankind himself in the foundries of Mars, the Blade of Terra burns with the life force of the Emperor, bringing swift death to those who would threaten the survival of humanity and the Imperium. Its mere presence is harmful to daemons, its touch destroying them outright.

The Emperor gains +100/200/300/400 dmg, and all his attacks deal pure dmg. When activated, the blade is wreathed in golden flames. While the blade burns the Emperor gains a 20/30/40/50% chance to deal x3/x4/x5/x6 dmg to any enemy he hits, and any enemy hit loses all their remaining mana, taking damage equal to the amount lost.

The most magnificent artifact ever crafted by the hands of a human, the armor of the Emperor shines like a star even in the deepest of darknesses. The sight of it on the battlefield often leaves the enemies of humanity stunned, on their knees begging for the sweet release of death.

Skill #3: Wrath of the Emperor

The wrath of the Emperor is a fearsome sight to behold. The fury of this god-like being is enough to not only destroy whoever stands against him, but even alter the annals of history, erasing whoever should raise his ire.

The Emperor targets a single enemy to suffer the brunt of his wrath, unable to do anything but batter the unfortunate enemy into oblivion. The Emperor gains +100 to all Stats for duration. Any enemy hero killed by the Emperor has a .5/.7/1/1% to be removed from the game (Insta-Defeat).

"In my image I have created twenty sons, to lead the greatest armies of man across the stars to save the wayward civilizations of man from their otherwise unavoidable demises. They shall be like torches in the darkest of nights, saviors of the faithful, destroyers of the traitors. Bringing the Imperial Truth to scour the taint where ever they shall find it."

The Emperor unleashes the Primarchs and their Adeptus Astartes on the enemies of man. Each base spawns a Primarch demi-hero, granting +100 dmg map wide to allied creeps. In addition each base featuring a Primarch now spawns 2/3/4x their normal limit. When cast a personal guard of 4/6/8 Custodes drops in on the Emperor's position under his control.

_________________
“The Machine is strong. We must purge the weak, hated flesh and replace it with the blessed purity of metal. Only through permanence can we truly triumph, only through the Machine can we find victory. Punish the flesh. Iron in mind and body. Hail the Machine!”

yes! wonderful! implement at once!

actually... other than the obviously overblown numbers... the skillset isnt that bad

Besides the fact Deus is on his knees in front of the Emperor, it's not so bad..

That's what I would want to say. xD I feel a more appropriate skillset would be this:

Innate: Stuck on the Throne

Skill 3: Mutter to one's many voices by oneself

If it weren't for Horus' bitch ass, the Emperor would've completely shut off the Chaos Gods from the Materium. He gave Horus the title of Warmaster and went back to Terra to work on the Webway gate beneath the Imperial Palace, which the Golden Throne was originally constructed to control, which would've completely removed the Imperium's reliance on warp jumps for travel- thus eliminating about 99% of the chances Chaos has to snare victims. Anyway, even on the Golden Throne, he's the only thing stopping the Chaos Gods from wtfpwning the galaxy.
_________________
“The Machine is strong. We must purge the weak, hated flesh and replace it with the blessed purity of metal. Only through permanence can we truly triumph, only through the Machine can we find victory. Punish the flesh. Iron in mind and body. Hail the Machine!”

just saying, the instant defeat part of wrath of the emperor and the massive bonuses are a bit OP. But nerf the bonuses and don't implement the defeat and it would be a nice addition. Yes I realize you weren't serious about the huge stats

I could easily modify the skill set to be used on another Imperial hero, Constantin Valdor, Chief Custodian to the Emperor, Captain-General of the Legio Custodes and a High Lord of Terra during the Horus Heresy. Seeing as the Custodes were created using the Emperor's own genes, and the lack of fluff pointing otherwise, it is conceivable that he is still alive and leading the Custodes in their defense of the Imperial Palace. I don't think putting the Emperor himself into the game would be justifiable.
_________________
“The Machine is strong. We must purge the weak, hated flesh and replace it with the blessed purity of metal. Only through permanence can we truly triumph, only through the Machine can we find victory. Punish the flesh. Iron in mind and body. Hail the Machine!”

Amusing under all circumstances, and certain to increase the popularity of the game by 500%, but not going to happen. xD