Disclaimer: There is woefully little fluff on the Adeptus Custodes, so not all of this is canon. 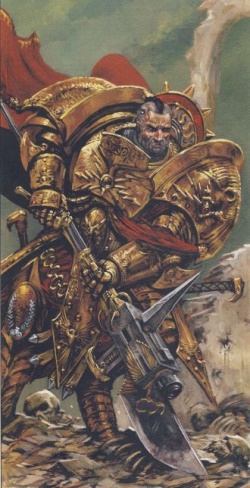 Those who think the Space Marines are the greatest force the Imperium wields have never seen the Custodians. Created from the Emperor's own genes, the Custodes are almost on par with the Primarchs, the Emperor's greatest creations. Tasked with being the personal bodyguards of the Emperor and the Imperial Palace on Terra, they possess unwavering loyalty and will brook no insult or threat to the Emperor- whether it be from a High Lord of Terra or the lowest of citizens. Constantin Valdor, Captain-General of the Adeptus Custodes, Chief Custodian of the Emperor, and a High Lord of Terra, is the greatest in their illustrious ranks. During the Horus Heresy Valdor carried out orders straight from the Emperor, earning 1,932 honorary names for valorous deeds before the Siege of Terra. After the Emperor was interred upon the Golden Throne, Valdor became the supreme authority inside the walls of the Imperial Palace, the sole decider of who gains access to an audience with the Emperor. Since the Horus Heresy the Custodians have rarely been seen outside the palace, emerging only during great crisis, such as the Siege of the Ecclesiarchal Palace.

"The Custodes are to the Emperor as an Astartes is to his Primarch."

Sharing the Emperor's blood, even as altered and ancient as it is, has given the Custodes their creator's psychic presence. To denizens of the Warp they are a searing light, baneful and terrifying.

Skill #1: Spear of the Custodian

On the few occasions Valdor finds need to lead his brethren outside the Imperial Palace, he takes up this ancient Guardian Spear, a halberd-like power weapon with built in bolter, gifted to him during the Great Crusade by the Emperor. In Valdor's hands it has lain to waste countless traitors and xenos.

Where ever Valdor goes in the Imperium it is known he carries the full weight of the Emperor's will. To defy him is defy the Emperor himself. Few foes have the stomach to put all they have behind any attack aimed at him.

Last edited by DeusMechanicus on Sun Dec 26, 2010 12:18 am; edited 7 times in total
_________________
“The Machine is strong. We must purge the weak, hated flesh and replace it with the blessed purity of metal. Only through permanence can we truly triumph, only through the Machine can we find victory. Punish the flesh. Iron in mind and body. Hail the Machine!”

Numbers, as usual. Tone down the conceptual power, just a little as well. Not to mention he can't possibly be alive, save in stasis or by virtue of a mechanical body.

Pure damage = Not something to be thrown around like paper. Please limit it if you can. ^^;

Innate: See Swarmlord's comments. It's far too powerful to casters, especially to those with high mana costs. Rakel's level 3 ult has a 500 mana cost, so there's a 20% chance that both effects can proc on the same cast, dealing 500 * 3.5 + 500 = 2250 damage off one ability. Either take one or the other effect, and supplement it with a lesser ability.

Spear: Again, pure damage overload, even with a drawback that is too powerful. Try not to give +40 damage to any hero, especially a hero with such offensive potential. Even Kharn has +27. >>

Presence: Copy of Carnifex's ability with simple damage reduction. See if you can't make it a little more original. ._.

Emperor survived for millennia, Custodians are created from his genetic material. Iacton Qruze lived atleast 2,000 years (they never state he dies in the HH novels). But I believe it also mentions somewhere in the book that their bodies do begin to break down eventually(though I'm sure they could, in the old days when gene-seed and such was readily available, get their organs replaced). The Blood Angels have a mutation that expands their life, so that doesn't really help (Dante has been Chapter Master for 1,100 years). But, I think it's safe to say, that after almost 20 different "Foundings", the genetic material they're using for today's Space Marines isn't the same caliber as the old ones.

Then again, comparing them to the Space Marines is unfair, because the Custodians were created from the Emperor's genetic material, and the Space Marines came from their Primarch, who also came from the Emperor but with a fraction of his power (Horus was powered by Chaos, otherwise he wouldn't have stood a chance). The only problem there is; are Custodians as powerful as the Primarchs? The Emperor did choose Custodians to be his personal bodyguards and the guardians of his home / lab / throne / et cetera, he didn't create more Primarchs. Then again, Primarchs are always said to be the greatest warriors in the galaxy. So... I don't know.

Another problem is, unlike the Space Marines, the Custodians were each "hand built", so to speak. While Space Marines uses a mass process, the Custodians were test tube babies each created personally by the Emperor, much like Primarchs. And, as I said earlier, with so woefully little fluff on Custodians, going solely on what they've given us, it's entirely possible this Custodian (Valdor) and his brethren are still alive and kicking in the current timeline.

Anyway, Celestine gets +10 per level for 4 levels.

And I don't play Carni, so didn't know that. Will do.

EDIT: Also, take into consideration that the Custodians have been guarding the Imperial Palace since before the Horus Heresy. The Emperor was the only one who knew the process of creating genetically enhanced soldiers- look at the "Cursed Founding", the High Lords tried to create new gene-seed on their own and failed almost completely. Even if they could it's doubtful the Emperor shared the secret to creating his own personal bodyguards with anyone in the galaxy (even the Primarchs), so if they weren't, in terms of aging, immortal then how would they still be guarding the Imperial Palace? They're more like Primarchs than Space Marines- as in they're born*, not created from living humans- so they can't have their genes harvested and put in a new body, so ... Yeah ... I think that pretty much puts the kibosh on that discussion.

*- If you can call the origins of the Primarchs births ... test tube / incubator babies.
_________________
“The Machine is strong. We must purge the weak, hated flesh and replace it with the blessed purity of metal. Only through permanence can we truly triumph, only through the Machine can we find victory. Punish the flesh. Iron in mind and body. Hail the Machine!”

Updated... Still need to come up with something for #3 and Ult ... but since we already have an abundance of Imperium heroes, I'm not in too much of a hurry.
_________________
“The Machine is strong. We must purge the weak, hated flesh and replace it with the blessed purity of metal. Only through permanence can we truly triumph, only through the Machine can we find victory. Punish the flesh. Iron in mind and body. Hail the Machine!”